What size should the Scooter Deck be?

Again a rider with a bigger foot will want a wider deck. A wider deck can also help you prevent your feet from scraping and getting bruises.

A wider deck will hug your foot and give you a better ride. There are very lightweight decks that are wider too. Some riders prefer narrower decks as well. Sometimes it just comes down to personal preference.

However, young children will not have a standard-sized scooter and the size of the deck may be very different. For very young children a wide deck is often considered optimum as it offers more stability and ultimately safety for the child. But the length of the scooter may be shorter as children have smaller feet and a long deck will obviously be harder for them to manage.

What is a Scooter Deck Made Of?

For older kids and adults most scooters will have lightweight but strong aluminium decks. They are also often covered in a slip-proof cover such as rubber. This will ensure them to ride and give the scooter some abuse without it breaking.

On scooters for younger kids, the decks are normally made out of a light but strong material.  It’s important that kids for younger kids that a scooter is lightweight so they are able to manage the scooter which is why other materials are chosen, normally some kind of reinforced plastic. For example, the deck of the mini micro, one of the most popular scooters for the 3 to 5 year old age group, is made of a flexible fibreglass reinforced footplate (also known as glass-reinforced plastic) which is designed to absorb the impact from bumps in the pavement offering a smoother ride.

Weight of the deck

​The decks of standard scooters normally weigh between 2 to 3 pounds whereas there are decks that are 3 to 4 pounds. Decks for kids scooters are generally a light lighter.
For stunt scooters, you will always find the weight of the scooter in the specifications as some riders value lighter decks over heavier decks.
Some decks will only be able to take a certain size of wheel, some can only take 100mm wheels so if you are looking for a scooter where you might want to upgrade the wheels check they can accommodate the size that you want.

Deck Terminology (on a stunt scooter) 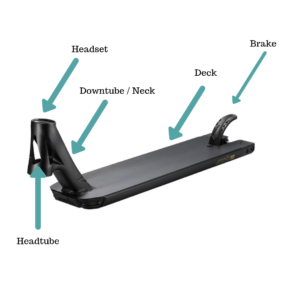 Most decks have integrated headset cups which is industry standard.

The headtube is where the fork goes through and connects the handlebar, deck and wheel. There can be varying lengths of headtubes.

The headtube angle can vary slightly from about 82.5 to 84 degrees. Although it’s only a couple of degrees difference it can make a big difference when you are riding.

The less steep it is, whips will be faster and be a little bit easier.

With a steeper head tube, whips will be slower and harder but the handlebar will be a little bit further away from you which will help you whole scooter feel a little bit bigger and the bars a little bit easier to toss.

The downtube goes from the head tube down to the deck. There are lots of different styles of downtube. Some have cutouts to make the scooter lighter.

Some downtubes impinge further into the deck.  If the deck is longer but the downtube takes up a lot of space, you may have less foot space then on a shorter deck where the downtube doesn’t take up as much space.

Front End of the Deck / Bluntplate.

There are a lot of different styles of blunt plates and it all comes down to preferences. Some will have caps and angled edges.

Scooter manufacturers have many different ways of making decks. There is a lot that goes into their design and there are many different reasons they are designed the way they are.

Top of the Deck

The top of the deck can be completely flat.

Concave – If it’s described as concave, there will be some slight curve on the top. Some riders prefer a concave, they find it a little more comfortable to ride and easier to do tricks especially if they are beginners. However, others don’t notice the difference so it does come down to personal preference as to which is the best.

The sides can be flat or slightly curved or even a 45 degree angle.

Bottom of the Deck

There are flat bottoms or grind rails.

Grind rails are what you’re going to be grinding on so this will hit the rails, ramps and ledges first. They can make the deck stronger.

There are lots of different types of brakes. Nylon, steel or fender brakes are all options.

The Best Types of Deck for Scooter Riders

The best type of decks will depend on the type of riding you do. You may want to choose a different deck if you predominately ride at the skate park than if you ride on the streets.

There are guidelines below as to what to look for. However, it will all come down to personal preference as well as your size, weight and style of riding.

If you’re a skate park rider you are going to want the lightest and fastest whipping scooter available with a headset with an 82.5″ angle.

For the deck size, you will want to base it off your size. Bigger riders may want a bit of a wider, longer deck.

However, for the averages skate park rider, a width of 4.5″ is a pretty good size.

The longer your deck the more effort it is going to be to whip. Most riders will likely want a scooter about 21″ in length. However, riders who are bigger may want a deck a bit longer than this.

Bigger is better according to the foot space, the width and the length.

Look for wider decks about 5″ plus. It’s more comfortable.

Most street riders are going to want a bit more foot space on their deck than a skate park rider.

Mixture Of Park and Street.

If you ride both, you are going to need to compromise on your features.

A headtube angle of about 83 to 84 will give you comfort but will still be good for the skatepark.

You want to keep an eye on weight, not too heavy.

Maximise your foot space as much as possible so you can throw tricks but it’s still comfortable on the street.